To be quite honest the Labour Leader and Deputy Leadership contest hasn’t exactly set me alight like it did in 2015 with the arrival of Jeremy Corbyn as a candidate. I suppose that’s inevitable to an extent because that was like a reawakening of something for some or the first flush of an political awakening for others. Also we’ve had 4 and half years of relentless attacks not just from the Tory press but pretty much most the whole media not to mention the attacks and backstabbing from inside our own party. I feel battle weary like most of us.  But when I look at our candidates for leader and deputy the one who really excites me the most is Richard Burgon and that’s who I’m endorsing for Deputy Leader.

That’s not to say there aren’t others I don’t like but it’s Richard who I feel is the one who’s carrying the torch that Jeremy lit for Socialism the most. Make no mistake I’ve always liked Richard but that’s not the only reason I will be voting for him. He’s a campaigner and if elected he’s promised that he will be a campaigning Deputy. We have to get back out into the communities not only listening but getting our message out there. Richard will help do that and engage and encourage our members to do it too. He’s a fighter who doesn’t give up as well that can be seen in his successful libel case against the Sun newspaper ( if it can be called that) and the Tories hate someone like that.

Something else very important is he’s a brilliant public speaker who always electrifiy’s the crowds. He is someone who can make us feel a bit better by his rousing speeches when things are tough. This attribute shouldn’t be underestimated because it’s a very powerful talent and is a vital part I think of the Deputies job. Richard is a breath of fresh air not just in this contest but in politics generally where boring and middle of the road politicians usually hold sway.

One of the most important things to me is that Richard is a Socialist and that’s vital to keep the party moving in a Socialist direction. So often in the past we have seen backtracks and capitulations on policy and I’ve every confidence in Richard to make sure there isn’t any sort of that nonsense if he is Deputy. As he says it’s Socialism that has given this country it’s greatest achievement the NHS and he wants more of society running along the same values putting people before profits. That’s why he’s calling for a new Clause IV that hardwires support for public ownership into Labour’s constitution. 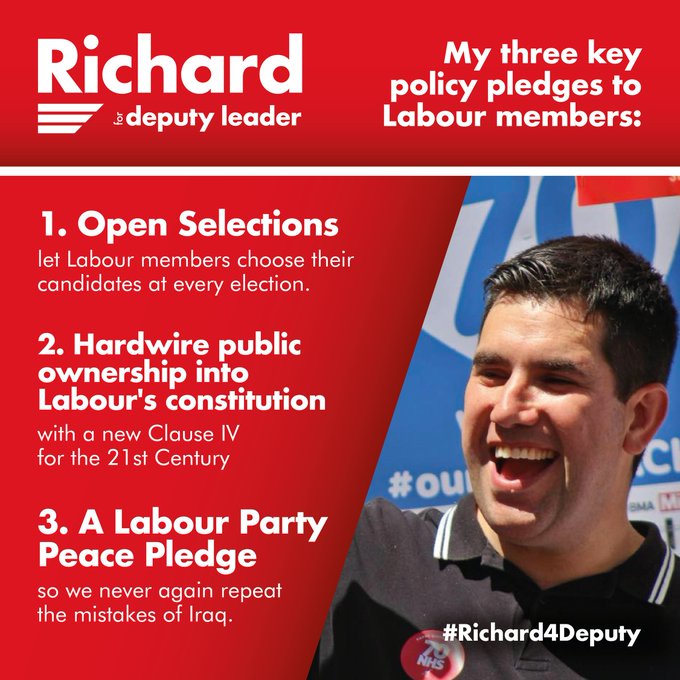 Something else that is vital for me is that Richard backs Open Selection. Much more needs to be done to democratise our party and this would be a massive step towards this goal. There really isn’t anything controversial about it after all it’s what Councillors have to do why not MP’s? What makes them so special? If they are good MP’s they shouldn’t have anything to worry about. The trigger ballot system is cumbersome and not as fair as Open Selection and has got to be the way forward for an open transparent socialist democratic party. 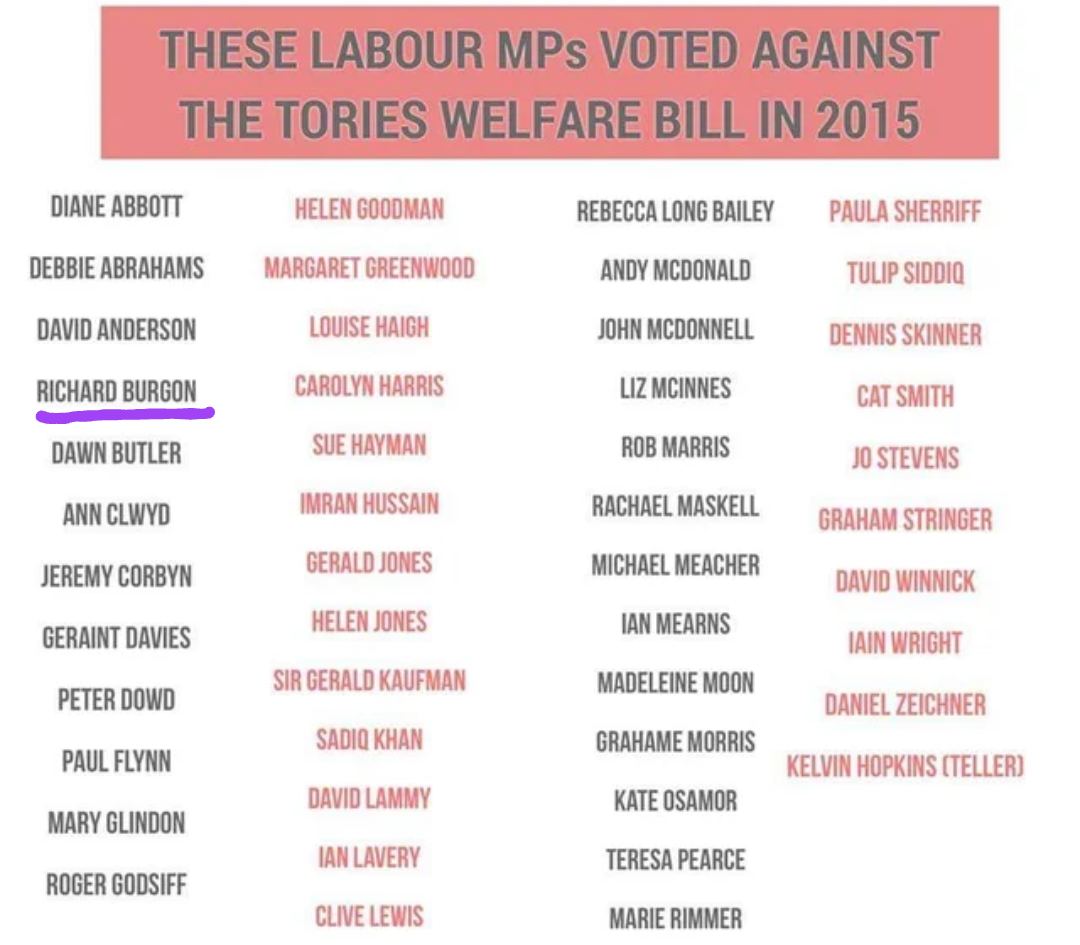 But when I look who to support it’s not only what they want to do in the future it’s what they’ve done in the past that interests me. Richard passes that test with flying colours. One of the most important litmus tests for me was the Tory Welfare Bill in 2015 and in all honestly I would only consider someone who voted against it for leader or deputy and as you can see from the list above  Richard voted against. I say this because it was a vital test and one of the clearest indicators I know of where the candidates really stand. We mustn’t ever fall into line with the Tories or play political games on something so fundamental as Welfare and this back in 2015 was a clear indication of Labour’s drift at that point. It’s Jeremy Corbyn who has put us back on track on this and so much else besides. To see Richard’s name on that list along with Dawn Butler and Rebecca Long-Bailey shows the only options for me to vote for.

Another plus point for me is that Richard’s campaign manager is the wonderful Laura Pidcock who was simply magnificent as an MP and is a massive loss to the Parliamentary Labour Party. Don’t forget he nominated Jeremy Corbyn for leader in both 2015 and 2016 and has been totally loyal to him since he became leader. More than that he has defended Corbyn against the demonisation he received in the right wing press time and time again.

There’s one last thing that I think is very important. I’ve said this many times before that I think it was our Brexit position that was the biggest (not only) reason why we lost in December. Since our disastrous defeat it’s been truly disturbing to see how so few have actually owned up to this catastrophic decision and how so few in the party actually get this. As you see Richard does and it’s another reason to vote for him because unless we understand and recognise  where we went wrong with Brexit we are going to struggle to ever win back these voters back to Labour. If we are to win the next Election we have to start winning these people back to Labour and we need to start doing it now. I’m convinced that Richard will be able to reconnect to our lost voters.

I hope that you can see why I think Richard Burgon is the best candidate for Deputy Leader and why I will be voting for him. It’s a time for standing firm and bold and there’s no doubt in my mind that Richard will do that because he has the courage and conviction needed. Backtracking and capitulation is not the way to go and will only lead to the collapse of our vote more. Richard gets this. Just one last thing like his Political idol Tony Benn he believes in a member’s led party and that is his aim to deliver that. Please consider voting for Richard Burgon as 1st preference for Deputy Leader. Thank you.

I've been interested in politics since I was a teenager way back in the 80's when I was drawn to the Socialism of Tony Benn. A lot has happened since then but Tony Benn has remained a political hero of mine. Because the Socialism that i'm interested in is all about making everything more Democratic. I lost interest during the Blair years but after a couple of years of Ed Miliband and by then having a young family I made the decision to rejoin the Labour Party with the aim of pushing it leftwards. I thought many felt the same as me after years of disillusionment and this was proved spectacularly correct with the election of Jeremy Corbyn as leader. View all posts by RickEvans1